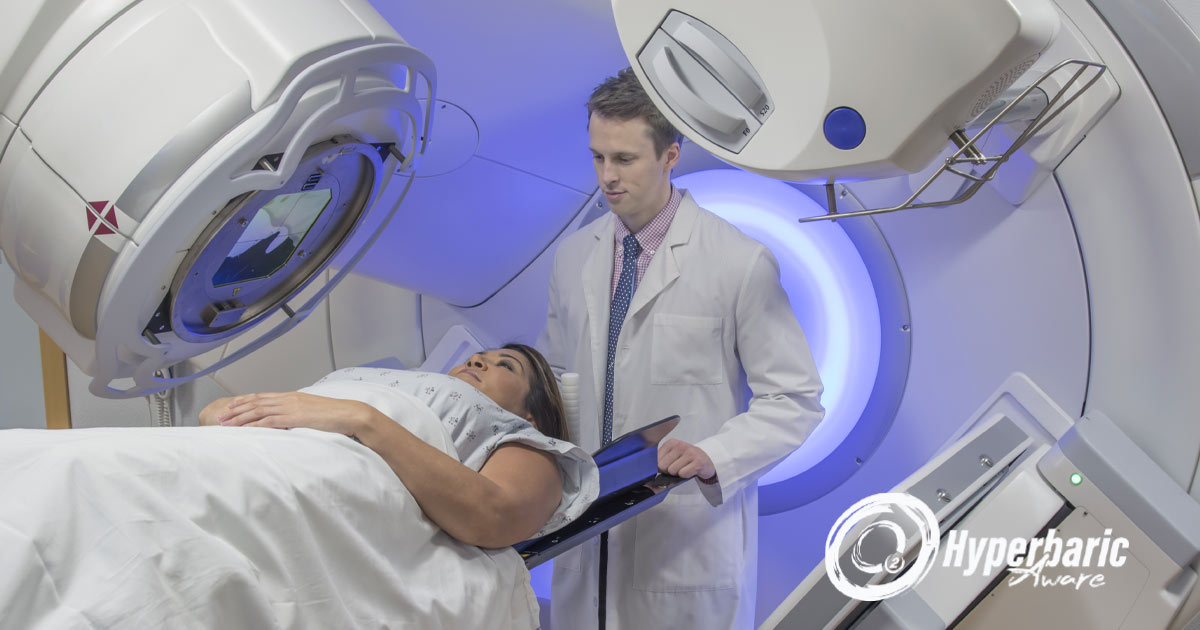 While we utilize radiation to kill cancer cells, it also damages healthy tissue that is next to the cancer. Radiation results in tissue that has fewer cells and blood vessels than non-radiated tissue, creating tissue that is more stiff and less tolerant of injury. Modern radiation treatments are designed to minimize this collateral damage, but cancer survivors often develop skin and wound-related complications in areas that have been irradiated 6-months or more – sometimes years– after radiation. Additionally, surgery in a previously irradiated field has a higher likelihood of poor wound healing.

HBO2 is able to reverse some of the effects of radiation therapy by stimulating blood vessel growth in previously irradiated tissue. This can be used before and after surgery to increase the chance of healing. This has benefitted thousands of patients who have had complications of radiation to the head and neck, bladder, bowel, and breast, resulting in decreased symptoms and increased healing. CRTI is usually defined as occurring at least 6 months after receiving radiation, and patients may not develop their symptoms for many years or after a surgical wound has failed to heal. This has led to some to question why we don’t use HBO2 after every patient who has radiation. Unfortunately, a course of HBO2 often takes 6-8 weeks, with each treatment lasting 90-120 minutes. It is a huge time commitment, and not every patient who has received radiation will develop complications of CRTI. Moreover, it has not been established that starting HBO2 right after radiation will have the same benefit as patients who have developed CRTI.

In 2009, doctors in the Netherlands studied this exact question in patients with head and neck cancer who received radiation.1 Instead of waiting for complications to occur, they started HBO2 within days of completing radiation. They used surveys to measure the quality of life (QOL) of these patients and found that patients who received HBO2 had a significantly higher QOL than those patients who did not receive HBO2. Unfortunately, the number of patients studied was too small to make widespread recommendations, and the subjective nature of the QOL surveys introduced the possibility of a placebo effect as patients knew whether or not they were receiving the HBO2 treatments.

Doctors in Portland, OR are conducting a new study to answer this question for breast cancer patients who have received radiation therapy after having had a mastectomy and breast reconstruction. These patients have a high incidence of developing post-operative infections, increased stiffness of the breast, and poorly healing wounds that may result in removal of the breast implants. The doctors at Legacy Emanuel Medical Center are studying a group of 60 women who meet the criteria described above. Half of these women will receive 6 weeks of HBO2 while half will receive oral medications (pentoxyfilline and vitamin E) for 6 months. They will be collecting measurements of how hard the breast becomes, whether there is or is not infection or poor wound healing, and whether or not the breast implant has to be removed. These objective measurements are less prone to a placebo effect, and they hope to demonstrate that patients who received HBO2 have better outcomes than those who only receive the medication.

At this time, HBO2 is not available for patients who have not yet developed CRTI except as part of this study protocol. We do not know for sure whether it will make a difference in the long run, but we are hopeful that we will be able to answer this question – at least for patients who have had radiation therapy after having had a mastectomy and breast reconstruction. In the meantime, patients who have CRTI should be aware that there may be a treatment option that can restore some of your body’s ability to heal and function more normally.