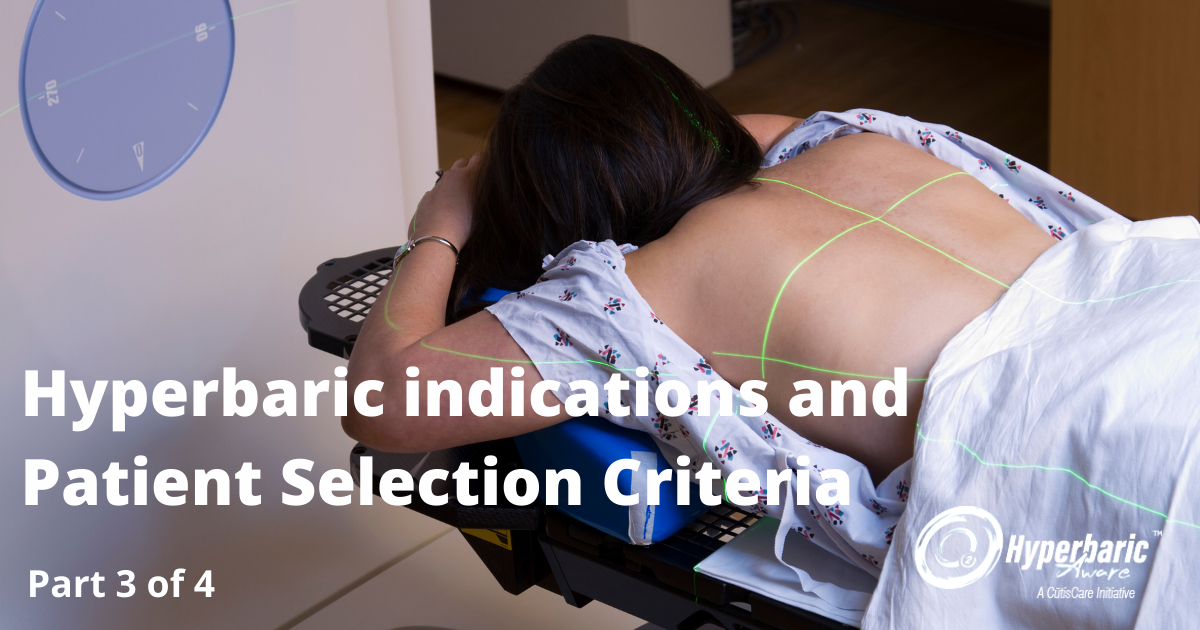 Currently 14 indications for HBO2 are recognized by the UHMS, with recommendations for treatment. What follows is an abbreviated description of each.

NOTE: While these are effectively ‘snapshots’ of each indication we strongly recommend a thorough reading of each chapter in the UHMS Indications book to appreciate the full view for HBO2 treatment of these conditions.

Gas can enter arteries as arterial gas embolism, or AGE, as a result of alveolar-capillary disruption. This can be caused by pulmonary overpressurization such as breath-hold ascent by divers. When gas enters veins it is referred to as

or VGE, and may be a result of tissue bubble formation due to decompression. This can be seen in diving and altitude exposure or during certain surgical procedures where capillary hydrostatic pressure at the incision site is subatmospheric.

HBO2 is recommended in cases of AGE with neurological manifestation. Generally speaking, a short interval between embolism and recompression treatment has a higher probability of good outcome, but a response to treatment has been observed after 24 hours or longer. Some patients resolve spontaneously a short time after symptoms develop, particularly after receiving first aid oxygen. However, because secondary deterioration can occur later, HBO2 is recommended even in the absence of symptoms. HBO2 is rarely recommended for venous gas embolism (VGE) unless AGE is also present. An isolated case report suggests that HBO2 may be effective for the treatment of pulmonary edema due to VGE.

Each year 50,000 people in the United States visit emergency departments for carbon monoxide (CO) poisoning. CO poisoning can occur from brief exposures to high levels of CO or from longer exposures to lower levels. Common symptoms include headaches, nausea and vomiting, dizziness, general malaise, and altered mental status. Some patients may have chest pain, shortness of breath, and myocardial ischemia, and may even require mechanical ventilation and treatment of shock. Individuals poisoned by CO often develop brain injury manifested by neurological problems, including cognitive sequelae, anxiety and depression, persistent headaches, dizziness, sleep problems, motor weakness, vestibular and balance problems, gaze abnormalities, peripheral neuropathies, hearing loss, tinnitus, Parkinsonian-like syndrome, and others. In addition, some will have cardiac or other problems.

Patients manifesting signs of serious poisoning – e.g., transient or prolonged unconsciousness, neurologic signs, cardiovascular dysfunction, or severe acidosis – should be referred for HBO2 regardless of their COHb level. Epidemiologic studies suggest that prognosis is poorer for patients who have underlying cardiovascular disease, are older than 60 years of age, have suffered any interval of unconsciousness due to the CO poisoning, or demonstrate severe acidosis.

Patients with CO poisoning should be followed after discharge. Even with hyperbaric oxygen they may have persistent problems after CO poisoning or even develop new problems weeks to months later. Common complaints in these patients include headaches, dizziness, imbalance, fatigue, sleep disturbance, and neuropsychological and affective symptoms, similar to those reported in post-concussive syndrome. Treatment is supportive. Some patients have cardiac problems after CO poisoning that require intervention. Studies that have followed CO-poisoned patients to a year and beyond have documented long-term adverse effects on cognitive function, quality of life, and general health.

Determination of the optimal pressure and number of HBO2 treatments requires additional study, as will the time following poisoning after which therapy is no longer effective. Based on favorable evidence from randomized trials, dosing between 2.5 and 3 ATA is recommended. While the majority of hyperbaric centers treat with a single HBO2 session, the best evidence for reduced cognitive sequelae after CO poisoning is for three HBO2 treatments within 24 hours.

Individuals with CO poisoning from fires may have also been exposed to cyanide from the burning of synthetic hydrocarbon products. These two agents in combination can cause synergistic toxicity. Severe cyanide poisoning is rapidly fatal; symptoms of mild or moderate cyanide exposure can be similar to that of CO poisoning and include headache, nausea, confusion, altered mental status, and cardiac problems. While CO poisoning can be rapidly diagnosed by COHb via co-oximetry, current laboratory testing for cyanide cannot be performed quickly enough to confirm diagnosis before initiating treatment. CO poisoning complicated by cyanide should be considered in patients presenting from fires who manifest altered mental status and those patients with soot in the mouth or mucous membranes. Once in the body, cyanide binds to the enzyme cytochrome c oxidase and blocks production of adenosine triphosphate (ATP), resulting in cellular hypoxia and metabolic acidosis. Patients with cyanide poisoning often require life support measures such as assisted ventilation, supplemental oxygen, and blood pressure support.

After supportive care has been established, a cyanide antidote can be administered. A number of antidotes exist but vary in their regional availability. If available, hydroxocobalamin with or without sodium thiosulfate is considered the antidote of choice as these agents appear to be effective and have a lower risk of serious side effects than other pharmacotherapies.

Theoretically, HBO2 may be of benefit in cyanide poisoning as it is known to preserve ATP production. However, the interplay of CO, cyanide, and nitric oxide regarding cytochrome c oxidase is complicated and the role of HBO2 is not known. Clinically, HBO2 has been widely applied for CO poisoning complicated by cyanide.

Clostridial myositis and myonecrosis, or gas gangrene, is an acute, rapidly progressive, non-pyogenic, invasive clostridial infection of the muscles characterized by profound toxemia, extensive edema, massive tissue death, and a variable degree of gas production. Gas gangrene is either an endogenous infection caused by contamination from a clostridial focus in the body (spontaneous, atraumatic) or an exogenous infection found mostly in patients with compound and/or complicated fractures with extensive soft tissue injuries after street accidents.

For clostridial myositis and myonecrosis (gas gangrene) or spreading clostridial cellulitis with systemic toxicity (or a presumptive diagnosis of either), the preferred treatment is a combination of HBO2, surgery, and antibiotics (non-spontaneous, traumatic).

Hyperbaric oxygen reduces morbidity and prevents or lowers the level of amputation necessitated by limb gas gangrene. The recommended treatment profile consists of O2 at 3 ATA pressure for 90 minutes, three times in the first 24 hours and then twice per day for the next two to five days. The actual decision on termination of treatment depends on the patient’s response to HBO2 therapy. If the patient remains toxic the treatment profile needs to be extended. Utilization review is indicated after 10 treatments. HBO2 is generally not used longer than five to seven days.

Decompression sickness (DCS, “bends”) is caused by formation of bubbles in tissues and/or blood when the sum of dissolved gas pressures exceeds ambient pressure (supersaturation). This may occur when ambient pressure is reduced during ascent from a dive; depressurization of a hyperbaric chamber; rapid ascent to altitude in an unpressurized aircraft or hypobaric chamber; loss of cabin pressure in an aircraft; and during space walks. In diving, compressed-gas breathing is usually necessary, but DCS has occurred after either repetitive or very deep breath-hold dives, although rarely. Arterial gas embolism due to pulmonary barotrauma can occur after a dive as shallow as 1 meter, but the threshold depth for DCS in compressed-gas diving is around 20 feet of seawater (fsw). DCS after a dive can be provoked by mild altitude exposure, such as a commercial aircraft flight, but without a preceding dive the threshold altitude for DCS occurrence in unpressurized flight is 18,000-20,000 feet. Diagnosis of DCS is made on the basis of careful evaluation of the circumstances of the dive or altitude exposure, the presence of known risk factors, and the post-dive latency and nature of the manifestations.

HBO2 is recommended for all patients with symptoms of DCS whenever feasible, although normobaric oxygen administration may be sufficient for the treatment of altitude DCS when neurological manifestations are absent, and for mild DCS (as defined below) following diving. For definitive treatment of altitude-induced cases that do not respond to ground-level oxygen, and for more serious cases of DCS after diving, HBO2 remains the standard of care.

At a consensus workshop on remote treatment of mild DCS – i.e., limb pain, constitutional symptoms, subjective sensory symptoms or rash, with non-progressive symptoms, clinical stability for 24 hours or more and a normal neurological exam – it was concluded that some patients with mild symptoms and signs after diving can be treated adequately without recompression. Although HBO2 remains the preferred intervention in all cases of DCS, not least because DCS may recover more slowly without recompression, it is acceptable to treat cases fitting the mild classification with first aid measures alone if access to HBO2 is logistically difficult or hazardous. First aid measures include general supportive measures, such as fluid resuscitation, airway protection and blood pressure maintenance as well as in-water recompression. Such decisions should be made only on a case-by-case basis and must always involve a diving medicine physician.

Administration of 100% oxygen at ground level (1 ATA) is recommended as first aid for all cases of DCS. Normobaric oxygen can be definitive treatment for altitude-induced DCS. HBO2 is a treatment that usually provides resolution or significant improvement of this disorder that can otherwise result in permanent spinal cord, brain or peripheral nerve damage or death, and is therefore an exceptionally cost-effective treatment.

in the United States. The management of delayed radiation injury, especially when bone is involved, requires a multidisciplinary approach. DRIs can result from the treatment of mandibular radiation necrosis, radiation therapy for head and neck cancer, breast cancer surgery, treatment of rectal cancers, gynecologic malignancies and prostate cancer. A host of injuries can occur that include radiation enteritis, cystitis, myelitis and proctitis as well as pneumonitis, brisk dermatitis and other cutaneous injuries, ulceration, chest wall and laryngeal necrosis.

Radiation injuries should be classified as acute, subacute or delayed complications. Acute injuries are due to direct and essentially immediate cellular toxicity caused by free radical-mediated damage to DNA in normal cells surrounding the tumor. Many cells suffer a mitotic or reproductive death, i.e., enough damage has been rendered to the DNA that successful subsequent cell division and reproduction are prevented. This mechanism is felt to be the primary method by which most cancer cells are destroyed. Acute injuries to normal tissues are typically self-limited and almost invariably resolve within a few weeks of completing the course of radiation, rarely persisting beyond two months. Treatment is generally symptomatic providing nutritional support and pain control. Though self-limited, acute injuries can be debilitating throughout their duration and must not be neglected.

Subacute injuries are typically identifiable in just a few organ systems. In the lungs. For example, injury can appear as radiation pneumonitis, a clinical syndrome mimicking bronchitis, with onset between eight to 12 weeks after radiation. Subacute injuries also occur in the spinal cord as the result of temporary demyelinization. Subacute effects are most often self-limited but on a rare occasion evolve to become delayed injuries. Some subacute injuries may persist for several months.

Delayed radiation complications are typically seen after a latent period of six months or more and may rarely develop many years after the radiation exposure. Sometimes, especially when chemotherapy and radiation are given as combined modality treatment, acute injuries are so severe that they never resolve and evolve to become chronic injuries indistinguishable from other delayed radiation injuries. Often, delayed injuries are precipitated by an additional tissue insult such as trauma or surgery within the radiation field. However, frequently late radiation injuries are spontaneous, and no immediate precipitating insult or injury can be identified.

The impact of hyperbaric oxygen in terms of its beneficial effects is likely to involve at least three mechanisms in radiation damaged tissues:

A growing body of literature supports the use of HBO2 in the prevention and treatment of radiation injury, usually in the setting of surgery within an irradiated field where the likelihood of complications is very high. Due to the varied nature and broad scope of delayed radiation injuries research is ongoing.