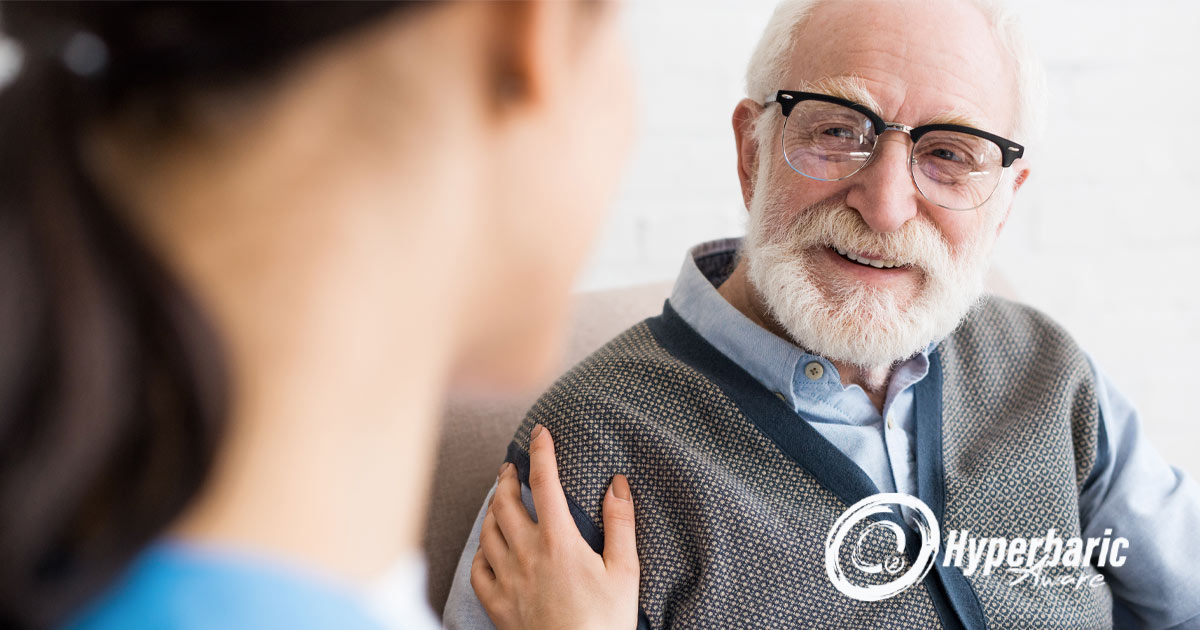 What is hyperbaric oxygen?

First we need to define the terms: Think of oxygen as a drug and the

as a dosing device. The mechanisms of action for HBO2 are based on elevation of the partial pressure of inspired oxygen, which is a product of the inspired oxygen (O2) fraction and the hydrostatic pressure. The empirical clinical use of high-pressure oxygen was framed from commonly accepted physiological principles and the laws of Boyle, Dalton and Henry.

The Undersea and Hyperbaric Medical Society (UMHS) defines HBO2 as an intervention in which an individual breathes near-100% oxygen intermittently while inside a hyperbaric chamber that is pressurized to greater than sea-level pressure – i.e., greater than 1 atmosphere absolute/ATA. For clinical purposes the pressure must equal or exceed 1.4 ATA while breathing near-100% oxygen. The United States Pharmacopoeia and Compressed Gas Association Grade A specifies medical-grade oxygen to be not less than 99.0% by volume; the National Fire Protection Association specifies USP medical grade oxygen.

represents the primary treatment while in others it is an adjunct to surgical or pharmacologic interventions. Treatment can be carried out in either a multiplace chamber (Class A) or monoplace (Class B). The Class A chamber holds two or more people – i.e., patients, observers, and/or support personnel; the chamber is pressurized with compressed air while the patients breathe near-100% oxygen via masks, head hoods, or endotracheal tubes. The Class B chamber accommodates a single patient; the entire chamber is pressurized with near-100% oxygen, and the patient breathes the ambient chamber oxygen directly.

This is a whole-body treatment at pressures higher than sea level. According to the UHMS definition and the determination of The Centers for Medicare and Medicaid Services (CMS) and other third-party carriers, breathing medical-grade 100% oxygen at 1 atmosphere of pressure or exposing isolated parts of the body to 100% oxygen does not constitute HBO2 therapy: The patient must receive the oxygen by inhalation within a pressurized chamber at 1.4 ATA or higher.

What illnesses are treatable with hyperbaric oxygen?

Currently the UHMS recognizes 14 indications recommended for HBO2 treatment. These indications are those for which in vitro and in vivo preclinical research data as well as extensive positive clinical experience and study have become convincing. They include:

Patients treated with HBO2 breathe roughly twice the amount of oxygen as sea-level air. Over time this wealth of oxygen helps stimulate angiogenesis, the formation of new blood vessels in the tissues. This in turn aids in healing as it delivers much-needed oxygen to damaged tissue. HBO2 enhances the effectiveness of antibiotics and boosts white blood cell count, aiding in recovery.

Pretreatment with hyperbaric oxygen can result in a state known as preconditioning. This is the induction of physiological and pathophysiological protective changes in the body (e.g., genetic or enzymatic modifications) against predictable, extreme, environment-induced and disease-related damage. Nowadays preconditioning is emerging as a useful adjunct in diving medicine, as well as in the treatment of acute and chronic diseases such as ischemia/reperfusion injury.

Although it is considered investigational, HBO2 after brain injury is being studied. The United States military has sponsored four randomized, double-blind clinical trials of hyperbaric oxygen for persistent post-concussive symptoms after mild traumatic brain injury.

Another study (an open-label, crossover design) from the University of Tel Aviv reported improved symptoms, cognitive function, and brain SPECT scans in civilians with mild traumatic brain injury after hyperbaric oxygen. Further research is needed regarding optimal pressure and frequency of hyperbaric oxygen and patient selection to ultimately lead to a phase III efficacy trial.

For a snapshot of how hyperbaric oxygen works on each of the 14 indications see Patient selection criteria for HBO2 treatment of specific indications.

‘The benefits of hyperbaric oxygen therapy’ from Intermountain Healthcare: https://intermountainhealthcare.org/blogs/topics/live-well/2016/03/benefits-of-hyperbaric-oxygen-therapy/